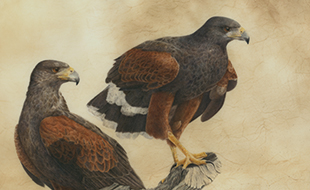 I had the pleasure of meeting this sibling pair of Harris’s Hawks at a raptor rehabilitation center. Their magnificence inspired me to paint them but at first I wasn’t sure of my composition. I researched the species, discovering that Harris’s Hawks hunt cooperatively in pairs or trios. The hawks surround their prey, flush it for another to catch, or take turns chasing it. I painted the moment the right hand bird was lifting to chase the lure, a second later the other hawk flew after his brother taking his turn ‘tagging’ their prey. They continued in this manner, taking turns going after the lure until their handlers called them back, which they did quite reluctantly. It was a thrill to watch them hunt just as if they were in the wild. The title came easy for this piece, tag team – two or more people working in association toward the same goal, except in this instance two hawks worked together to catch their ‘prey’!