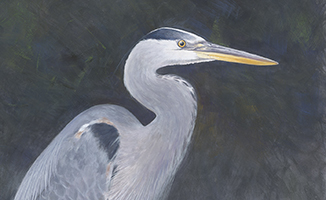 I came upon this heron while hiking in Oswegatchie Hills Nature Preserve in Niantic, CT. I have been hiking the preserve once a month for an ongoing conservation project. I found three great blue herons on Clark pond in July. Due to the drought here in Connecticut, the water was very low and there were many water lilies. The herons were all hunting frogs. This heron had just caught a large bullfrog and the other two herons gave a very noisy chase. There was lots of squawking and wings flapping and feet striking, but it kept its frog! Upon landing in this spot, it promptly swallowed the frog and stood serenely as if nothing had happened while the other two herons flew back up the pond, squawking away.